Thank you for your patience while we retrieve your images.

Born on November 21, 2002, Otto Joined our little pack on December 13, 2008. He was six going on two, but was for the most part a perfect gentleman. He came to us as a rescue by way of RAGOM.ORG. In his former life, he was a hunting dog. In his new life, he just hunts for an excuse to curl up on the bed.
We had to say goodbye to our happy little guy on May 21, 2017. We will miss his exuberance for life. This is a bit of a note that Jennifer wrote to his favorite dog-sitter "Aunts:" "When Otto came to us he didn't believe that he mattered much or that he had a very important place in this world. He left it, however, knowing that he was valued and deeply loved. And, not just by us but by so many others--like the two of you. Everyone who encountered him thought--and told him-- he was sweet, polite, good, handsome. He even converted some staunch anti-dog people! I am in awe of his courageous spirit to dare to trust and love humans in his second half, when his life really began. He approached life with such gusto, and as we got to know him we saw layers fall away revealing a joyous, gentle and unassuming spirit, willing to trust and to love. Yet, there remained a piece of Otto that was vulnerable and a bit unreachable--evidenced by his lack of eye contact. But, that was part of his whole being and he certainly overlooked all of our personality quirks." 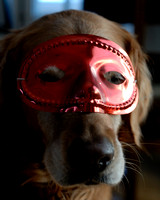 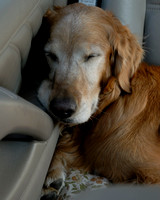